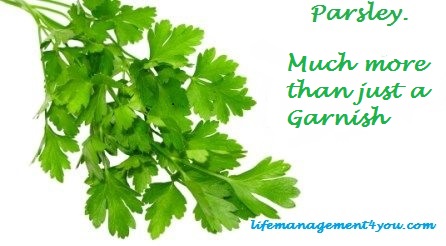 Parsley may be one of the world’s most popular herbs and more than just a garnish. In fact, it could help improve your life in many more ways than one.

Parsley, Much more than just a Garnish

How many times have you gone out to dinner?

You finished that delicious meal you ordered and in the end, the only thing left on your plate is this green looking thing called parsley.

For far too many times, this is what remains on the plate.

Parsley for far too long has been known as the garnish that looks good on the meal but is put aside and left to be thrown out in the trash at the end of the night.

It has been estimated, that over 90 per cent of parsley presented on the plate, as a garnish is untouched.

Well, this green thing can provide much more than being the decorative garnish on your plate.

Parsley is native to the Mediterranean region of Southern Europe.

Wide-ranging use for parsley existed in Ancient times.

Although not consumed themselves, the Roman Charioteers included parsley into the diets of their horses in order to make them strong as swift-footed.

They would often wear garlands made of parsley on their heads during feasts, as they believe that parsley took away the intoxication effects during their drinking times.

The Ancient Greeks also did not partake in the eating of parsley as their associated this herb with death.

It was believed that parsley sprung from the blood of the slain heroes.

As such in respect of the passing of a friend, competitions would be held, where the victors were crowned with parsley thus giving them great honour for their achievements.

The Romans also believed that Parsley protected them against evil spirits to the point where during weddings, wreaths of parsley were given to all.

They felt that where parsley grew well this would not be a place that evil spirits or the Devil were attracted to.

What is the difference between Curly and Flat Leaf Parsley?

There are many varieties of Parsley; however, there are two main types. 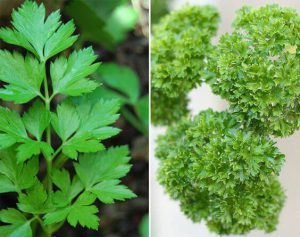 It is the Curly leaf, which you will find mostly on culinary dishes, as it appeals more to use as a decorative garnish.

The Italian parsley is the more common form used within the cooking stages of the dish.

Parsley is widely used in Europe, Middle Eastern and gradually has become widely accepted around the world.

Both types of parsley can be used in culinary cooking however, many restaurants normally prefer the flat-leaf to the curly parsley.

The Flat-leaf is more robust and has a stronger flavour than its Curly counterpart has.

However, that can also be open to interpretation depending on the person’s personal choices.

The main ingredient is Parsley

Many dishes around the world use parsley as a major ingredient other than just as a condiment, garnish or a few leaves in the cooking.

Two of my favourites are mentioned below.

In Middle Eastern Cuisine, parsley is a very popular herb and as such is the main ingredient in Tabbouleh.

Tabbouleh is a salad using Bulgur, Mint, Parsley (heaps of it) and vegetables.

When is the last time you had a Kebab and found that Tabbouleh is available as part of the choices to add?

In fact, for a great variety and change make this your salad you would prepare at home occasionally.

Tabbouleh has a wonderful taste and texture and is very beneficial to your health.

(As you read further on you will find how wonderful it is to have Tabbouleh as part of your meal.

In South America, there is a sauce called Chimichurri (one of my favourites that I love making).

It is originally from Argentina and made mainly of finely chopped parsley (again heaps of it) along with finely chopped or minced garlic with oregano, white vinegar and depending on your personal choice red pepper flakes.

A personal choice added to the ingredients above would be paprika, cumin, thyme and plenty of lemons.

These additions really enhance the flavour (Hint; I also add a bit of hot chilli for an extra bite.)

Choripan, some call it a Chorizo Hotdog. This is a South American type sausage called Chorizo with the Chimichurri sauce placed in a bread roll. 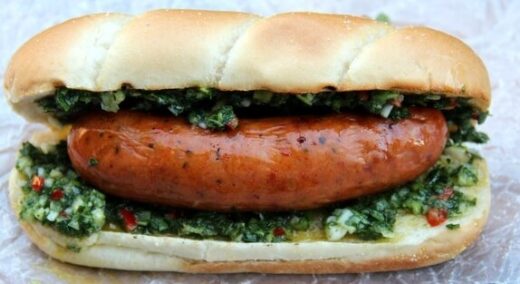 This is ten times better than your standard hot dog with sauce regardless of the extras are added to it.

This is the power of Parsley when it is included as the main ingredient rather than as just a garnish.

Yep Parsley is more than a Garnish

There are so many health benefits to having Parsley.

Once you see what they are, I am sure you will no longer leave that piece of garnish on your plate ever again.

Besides, think of it this way.

You paid for it so why would you waste your money leaving it on the plate?

Chewing the fresh leaves is a traditional, effective breath freshener, which is helpful to us garlic lovers.

Chewing the seeds helps to reduce gas and bloating.

Popeye would have been stronger using parsley than Spinach 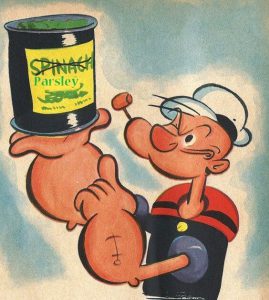 Had Popeye known about Parsley he would have found out that Parsley has twice as much iron as spinach.

Let look at the comparison between Spinach and Parsley. 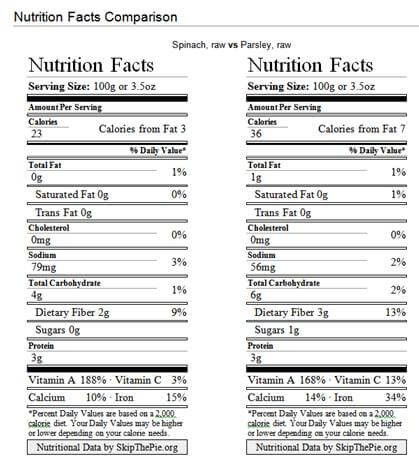 As you can see parsley has just over twice as much iron as Spinach, much more Vitamin C, more Calcium, and just under the Vitamin A category compared to Spinach.

As you can see just on this parsley is more than a good looking garnish.

What about other vitamins and minerals?

Parsley contains over 3 times more vitamins as does an equal weight of oranges.

In a study published in the Annals of the Rheumatic Diseases in 2004, people who had the least amount of foods containing Vitamin C had three times a greater chance of developing Rheumatoid Arthritis compared to those who had a good amount of foods rich in Vitamin C.

As shown above, Parsley certainly fits into the category of having a rich amount of Vitamin C.

Vitamin A, which is important in the use for night blindness of which Carrots are well known to have.

Yet this humble herb contains 22,500 units of Vitamin A per ounce compared to Carrots which contain only 1,275 units per ounce.

It contains more phosphorus and calcium than most vegetables along with a good source of manganese, potassium, and vitamin B.

Just two tablespoons of parsley can provide over 150% of the daily recommended value of vitamin K.

Health-Giving Properties Parsley can give.

Within Parsley, there are oils that have been found to inhibit tumour formation in particular within the lungs.

The oil helps to neutralise the carcinogens such as those found in cigarette smoke and the unknown many people may not realise but also in the charcoal grill smoke.

Flavonoids an antioxidant compound found within parsley when mixed with oxygen molecules help prevent damage to cells that are oxygen-based.

This acid helps to prevent colon and cervical cancers.

This acid is also a critical nutrient dealing with cardiovascular health.

Within the body, there can be dangerous homocysteine molecules, which can damage the blood vessels that may lead to dangerous situations such as heart attacks and stroke.

How Safe it Parsley?

The recommended dose can be up to 6 grams per day.

For pregnant women and those breastfeeding parsley consumed as part of a meal, is considered safe.

However taking larger or concentrated amounts that made be found in supplements should be avoided as this could lead to uterine stimulation, bleeding, and possibly preterm labour.

For those using blood thinners such as warfarin and other types take caution as the Vitamin K content of which Parsley is high, helps to assists blood clotting.

So be aware of this as you do not want the blood to thin out too much than normal when taking blood-thinning medications.

Taking large amounts of parsley for some can lead to side effects such Anemia, those with liver issues and for some parsley can make the skin more sensitive to the sun, which can lead to formations of a rash.

It is also best to consult a medical professional prior to making any major changes in your diet.

Always stay safe, ask if you are not sure and remember that the journey starts with you.