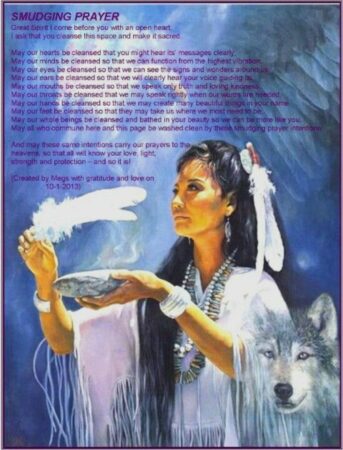 White Sage Smudge Sticks have been used for centuries; The Native American Indians would purify and renew the energy around them in a term called Smudging.

I am an affiliate for various programs, and as such should you purchase any products from the links that I provide, I may receive a small commission as a result of the sales at no cost to you.

It is not just the Native American Indians that would use White Sage Smudge Sticks, which is a traditional and spiritual ritual used by many cultures worldwide.

Yet the main purpose is the same that is to clear the negative energy that has been collected around them or the living area; by doing so, it helps to rebalance and renew the positive energy from the surroundings.

However: Not all Sage is the same.

Under the Genius of Salvia, there are many different Sage species, including the ones mentioned above.

Some species are mainly grown; as ornamental flowers, some for landscaping purposes due to the many varieties of coloured flowers they produce. Some like the common Sage is used in cooking to enhance the flavours in many dishes.

There is Common Sage, and there is White Sage.

Among the many varieties of Sage, the Common Sage is the herb normally grown to use culinary dishes.

However, their use does not stop at the cooking stage. There is more to this variety of Sage than meets the eye.

Although there is too much to discuss here, a separate article has been posted, showing the many other benefits of Sage.

This will enable us to focus more on the benefits and uses of White Sage below.

You can find this separate article of Sage by selecting this link when you are ready.

Sorry, I meant the other White Sage. That’s better.

We will discuss what many, Native Americans, Healers of past and present, along with many spiritual people, have known this to be.

Smudging with White Sage Smudge Sticks helps to purify, restore and rebalance the energy by cleansing any negative energy lingering around. Click To Tweet

White Sage is considered a special and sacred herb that is used in a term called Smudging to purify and cleanse the negative energy around.

It is interesting to note that the Genius name that is given, Salvia, is associated with Sage, especially White Sage.

Salvia comes from the Latin name Salvus, which means to feel healthy, safe, unharmed, or saved, which connects well with the benefits and uses of White Sage, as we will find out now.

Most commonly used to negate the negative energies within and around the body and area surrounds.

For hundreds of years, if not more, traditional ceremonies would use White Sage, both for clearing rituals as well as for personal use.

Many Native Americans, along with Sharman’s around the world and those with spiritual interests who know and understand the importance of such benefits, still use the cleansing rituals to this day.

During times of struggle, stress, challenges, and even confrontation, people would call upon the power of White Sage, where it became a respected and honoured friend.

The best method is called smudging.

This is where the White Sage leaves are bundled together to form smudge sticks.

From here, the tips of the leaves would be burnt; then, once the fire has gone, allow the smoke to be generally fanned gently either around the person or area that is requiring the cleansing.

The negativity that you do want.

Ions are molecules that, due to atmospheric forces or, as stated above, environmental influences, have either lost or gained an electron.

The positive ions are molecules that have electrons missing and negatively impact the body and environment.

An excess of positive ions can affect the environment and the human body, both in the physical and spiritual sense.

Consider the positive ions as a creator of dust that inhibits the body and the area around from moving freely and comfortably.

In time, this dust creates havoc on the body’s immune system and gives the unwanted feeling of being within an area that you struggle to move around without stirring up the dust around you. Negative ions are charged molecules that have gained the electron.

When negative ions attract and connect with the positive ions, they become charged, therefore dissipate the unwanted energies positive ions have allowed to linger on.

The negative ions become the dust collector allowing you the freedom to move and allow you to breathe comfortably with ease.

Have you ever felt that uplifting moment when after a period of dryness, the rain comes along and changes the atmosphere around you?

To the point, you feel relaxed and refreshed. Just ask any farmer during those drought seasons how it feels when the rain comes. What about when you are by the ocean.

Have you felt that feeling of serenity and relaxed atmosphere watching and hearing the waves crashing down on the beach as it moves in and out?

That is the example that negative ions can create, so these are the only form of negative that you would want around you.

When cleansing and clearing with White Sage helps to uplift the moods around the area and creates that relaxed atmosphere.

The leaves of the White Sage are bundled and tied together to form Smudge Sticks. (Refer to diagram).

This is the common practice performed and used by the Native Americans, Shamans, other healers, and the many spiritual people of today.

The White sage, when burned, produces negative ions as described further above.

It becomes the dust collector at the physical and spiritual level, aids in clearing away any unwanted energies lying around, which creates unnecessary feelings of negativity.

How to use Smudge Sticks for clearing and cleansing

This method is not only for ritual gatherings but can also be used on a personal level or around the home. Before you light the Smudge Stick, is it best if the following setup is maintained.

Considered by many, White Sage is sacred, as is the intention of the smudging you are about to perform.

The main aspect here is to use your intuition of what you feel is best.

What is your preferred method?

Do you have your own method of clearing you would like to share with others to know?

What about any incantations you may use?

Perhaps you have some visualization techniques you wish to share that may help your fellow soul traveller.

If so, I would love to hear from you.