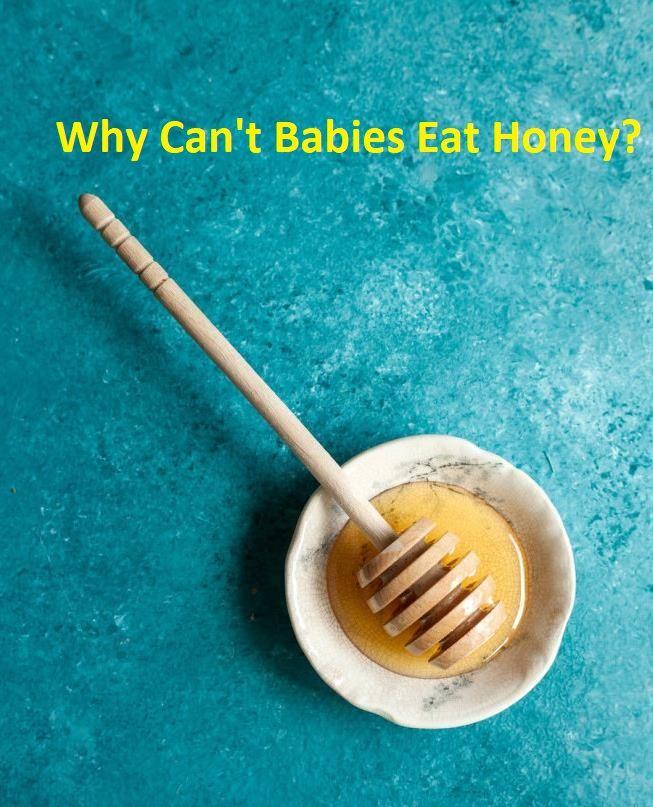 Why Can’t Babies Eat Honey? Babies under 12 months should not be given honey in any form. As the bacteria found within honey can cause Infant Botulism.

Although honey has many amazing benefits it is considered a big no-no to give to babies under the age of 12 months.

It is highly recommended that Honey is not given to a baby before the 1st year of birth.

This is mainly due to the fact that the infant’s immune and also digestive system is not fully able to fight off botulism.

Botulism is caused by bacteria that may cause the body’s muscles to weaken which eventually can lead to the inability to breathe resulting in death.

Honey is the perfect environment for botulism because it doesn’t need oxygen to reproduce, and due to the honey’s low acidity, low salt, and that honey stays a consistent mass, it doesn’t freeze.

In the case of a baby under 12 months, the main concern is Infant Botulism.

Although botulism is rare, it is better to be safe than sorry.

So let’s learn more about what Infant Botulism is, its relationship with Honey, and also when can a baby have honey along the way.

Botulism can become a very serious illness for babies less than 12 months of age.

Botulism is normally transmitted through food, contact with contaminated soil, or via an open wound.

The reason for the seriousness is due to a toxin caused by bacteria known as Clostridium botulinum.

When this bacterium enters the body can lead to many serious issues such as paralysis, breathing difficulties, and even death.

There are various types of botulism however in the case of babies under 12 months the most serious one is called Infant Botulism.

Clostridium botulinum when ingested by babies less than 12 months creates what is known as Infant Botulism.

Although this bacterium can be found in soil and dust, it can also contaminate certain foods such as honey among other canned foods as well.

An undeveloped digestive system especially during the first 6 months hasn’t built the right gut microbes that can handle the many forms of bacteria entering the body.

It is simply not able to cope and therefore makes this a more serious issue to deal with and can be quite deadly as a result.

Between 6 months to a year and depending on what and how you may wish to introduce other foods.

Remember during the first 6 – 12 months of life the Mother’s Breast Milk is all it needs.

Honey should be avoided till at least after their 1st year of birth, if you can wait a bit longer even better as there is really no need to introduce sugars too early.

This would allow more time for their delicate bodies to fully be able to cope with other foreign invaders such as bacteria and other toxins out there from entering their bodies.

Normally by the age of 1 onward, their bodies have developed a stronger immune and digestive system that is able to withstand the various forms of botulism or other bacteria entering the body via various forms of food or drinks.

This is why it is important for parents to avoid giving their baby honey if fact any form of food that contains honey.

Even a small teaspoon can result is serious issues.

Although it is recommended not to give babies less than 1 year of age honey, the most serious period is usually from 3 weeks to 6 months of age.

Nevertheless, all babies under 12 months are at risk.

What are the signs and symptoms of Infant botulism?

Babies that are suffering from Infant Botulism should be treated immediately in the hospital.

Doctors can give an antitoxin called BIGIBV (immune globulin intravenous for the official term).

Time spent in the hospital can be weeks or months this can also depend on how soon the baby is diagnosed and how quickly the antitoxin is given after diagnosis.

Some babies may need a ventilator until they are able to get stronger before being taken off the breathing machine.

Can Infant botulism be transferred during breastfeeding?

So a breastfeeding mother can consume Honey and know that it won’t be passed on to their baby while breastfeeding.

Just ensure that standard hand washing practices are adhered to.

Even the slightest form of honey may create issues.

Just think about having some honey on your fingers when you are either attaching or releasing the baby from the nipples.

It can become so easy for a bit to enter their lips and mouth.

Should your baby have botulism it is recommended to continue to breastfeed either nursing or with expressed breastmilk?

What is the difference between Babies under 12 months and those over 1 year?

One of the biggest reasons between babies under 12 months and those over 1 year is that those under 12 months’ bodies are still in the development stages of building up their immune defense and digestive system.

Part of this development is two key components necessary for life.

• The Immune system
• The Digestive system

The immune system helps protect the body against outside invaders such as viruses, bacteria, and toxins.

The digestive system can help to remove such invaders before it has a chance to talk hold and cause illness.

It is for this main reason why care needs to be taken during this period as a baby has not yet built enough defenses against outside invaders such as bacteria amongst other factors.

As you know bacteria come in many forms and in many ways.

For babies, less than 12 months this can become a serious issue not only to their bodies but also to their health that for some, may result in a serious illness and/or unfortunately death.

When can babies have honey?

Generally, it is deemed to be safe to give honey after their first year of birth.

This is due to the fact they have now developed a strong immune system and their digestive systems are better able to combat the effects of Infant botulism.

This is why it is recommended and best to avoid giving honey in any form until after year 1.

Another fact of note

We already know the many benefits of honey and certainly is a better alternative than inducing other sweeteners.

Yet the fact remains.

Around the 6-month mark, your baby is starting to bring forth baby teeth

Now honey may be great to give your child after 1 year of age do not be in a hurry to overdo it and too much can create more harm than good in the long term.

The more honey and indeed other sweeteners are introduced earlier the more likely for them to develop that sweet tooth effect.

When it’s time to introduce more nutritious foods, (which for many children) may at first taste bitter.

If they are used to having honey or other sweet foods will most likely refuse the more beneficial foods and choose sweeter foods like honey.

So if you do plan to give honey after the age of 1, make sure it is given in small amounts and not as a regular offering.

Better still to avoid that sweet tooth taste introduce them to other vegetables and foods that have more health benefits outside of sugar.

We all know most kids are not too fond of foods such as broccoli and Brussel sprouts as an example.

I remember giving my children such foods (which are more beneficial and have more nutritional value) and only giving sweeter foods once in a while at the start of their early infancy and they still love eating them now.

They are 27 and 25 years old now and I have to compete with them to get some myself.

But I can live with that at least I know they don’t have those sugar cravings and eat more nutritious foods to this day.

It all starts at an early age the fewer sugar hits they get when they are young the better they will be when they grow along their own journey in life.

The other factor of having sweet foods such as honey (remember it is still sugar) can affect the development of their teeth which may create oral issues such as gum disease and tooth decay even at an early age.

Yes, honey can help with oral issues but these days too many parents are introducing far too many forms of sweeteners including honey for the sake of it.

The same goes for drinks I might add that will also help cut down on unneeded sugar again not just for overall health but for their teeth.

Pacifiers are another separate issue I will write about later but adding honey won’t help your cause with their teeth.

However the main point of pacifiers along with the nipple on any bottles used as well.

The suckling motion is different compared to suckling from the mother’s nipple during breastfeeding which can have a drastic effect on both mother and child.

Confusion for the baby can result in further issues not just for the baby but can create painful issues for the mother with cracked or bleeding nipples as a result.

Not to mention giving a bottle too early can create other issues for the mother.

In simple terms, if you are still breastfeeding using pacifiers can interfere with them getting the full benefits of your breastmilk.

So now we understand Why Babies Can’t Eat Honey, especially during the first 12 months of birth along with the Botulism (Bacteria) that may be present in honey.

As a result, Infant Botulism may occur which has very serious repercussions if taken in any form before 1 year of birth.

It is important to allow time for the baby’s immune and digestive systems time to develop.

When developed after the first year they are better able to cope with any forms of bacteria or other foreign invaders that may be present.

Should a baby have signs of botulism please go to your hospital for immediate care the sooner the better.

Always remember although honey is very good after the age of 1 and better than other sweeteners it is still sugar and too much is never a good thing.

Not only now but for the sake of proper development of their teeth as they grow up.

So please avoid giving honey during the first 12 months regardless of the amount even a small dab can create havoc on their bodies.

Don’t take the risk not worth it.

I would love to hear any comments or experiences you may have had with your baby when dealing with honey.

Thank you for your time and may your child be blessed with a healthier life.