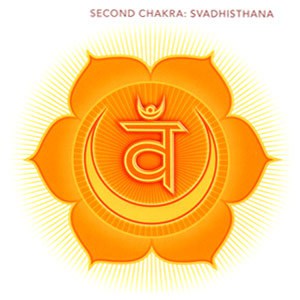 What is the Sacral Chakra also known as the Second or Svadhistana Chakra relates to your sensuality, issues of emotions, relationships, sexual libido, and Joy

The Second Chakra  or Svadhistana or Sacral Chakra

Attributes: This Chakra mainly relates to Sexuality, along with all emotions.

Petals of the Lotus: 6

In a previous post, “What are the Chakras and their meanings”, There are three Chakras are known as the lower Chakras.

These are the Root, Sacral, and the Solar Plexus which relate more closely to the physical aspects of the material world.

These three chakras start from around the base of the spine past the lower abdomen then ending towards the area just below the breastbone.

The Sacral Chakra is the second of the three lower chakras.

Although the first chakra relates more to the primal sexual drive, the sacral relates to the emotions of these sexual drives.

The first chakra may be based more on Sex; however, the Sacral Chakra when balanced gives the knowledge of oneness when making love.

It is here when we go within; we learn more about our emotional thoughts, feelings, and attitudes to not only others but very importantly with ourselves.

Here it will depend on how we act upon these emotions that not only affect sexuality; but also by the way emotions are handled.

It is not surprising that this sacral or second chakra is associated with Water which relates to emotions.

So what is the Status Quo with the Sacral Chakra?

Please note that this goes for all chakras you need to also take note of other chakras and where you are at with them.

Do not take a one-sided view of a particular chakra as for many when one is affected another Chakra might be also affected.

Remember some chakras may work overtime to try to adjust another chakra and at times at its own expense.

You will find that when in balance a much healthier relationship exists not only with oneself but also with others.

This along with being able to handle daily issues dealing with emotions along with your normal day to day relationships this could be in a working environment, at home and with life in general.

When there is an overbalance you will find someone who may be over-emotional to the point that fear and panic can come into play.

Worrying unnecessarily about what other’s think or for some, thinking that others feel a certain way towards you.

Becoming overly sexual is also an issue that needs to be dealt with when overbalance with the second Chakra.

Psychological issues can arise for some with an under-balanced Sacral Chakra.

Issues, such as intimacy, low self-esteem, self-confidence not only with oneself but also within a relationship.

Eating disorders can be connected to an unbalanced Sacral Chakra.

For many, this can further progress into deep-seated issues such and depression and for some self-destruction that can lead to an early death.

Due to its Colour, eating foods are some of the great ways to help balance this second Chakra.

As this relates to water it is obvious that drinking a fresh amount of water help hydrate the body which will also help the flow of blood around the body system.

What are you wearing?

Another way to help kick start the day for your Sacral Chakra is to wear clothes or at least part of the clothes that has the colour Orange with them.

A great way with this method is that you can use visualization as part of a meditation.

Again there are various techniques that will be discussed later.

Visualization of the Lotus and or spinning wheels.

The rise of Kundalini energy,

This can be done with any of the other chakras mentioned.

In another article, there will be some meditation techniques both for beginners and intermediate.

Advanced users would already have different methods of preference however you are always welcome to re-connect in another way.

Crystals can be used in various ways one method is by placing certain types of Crystals upon each Chakra point.

Another method is to wear them as jewellery or perhaps carrying them around in your pocket.

Great Crystals of the Sacral Chakra are Carnelian, Moonstone, Tiger Eye. More on Crystals will be discussed elsewhere.

In later posts we will also be working on balancing the Charka using essential oils, discussing Reiki, other Hands-on Healing,  and one of my favourites, Reflexology.

All of these are of immense support and benefits for Chakra balancing, Healing, and energy transference.

So here you have some meaning of What is the Sacral Chakra and what issues and resolutions can be made to work on balancing the Second Chakra.

Please if you have other crystals you use or perhaps certain methods that you may have found useful, then drop a comment below so others can benefit from your experience.

Next part 3 What is the Third Chakra?