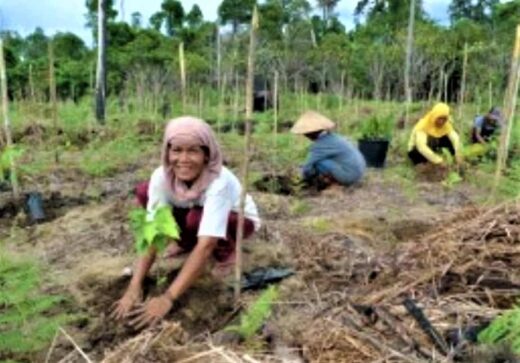 Eden Reforestation Project helps save lives in some of the world’s poorest areas by planting trees lost to deforestation.

The Bigger Picture with Deforestation

The loss of trees through Deforestation is a tragedy for the many local communities that live off the land, particularly within the third world or least developed countries such as Ethiopia, Haiti, Madagascar, and Nepal.

However, when you start to look at the bigger picture this loss has caused, you will see how vital it is to reintroduce reforestation to the land that the Eden projects have in place.

Deforestation within these lands are not normally a result of commercial logging you would normally hear about in many of the much higher developed nations but more of a result of the great need for survival to live off the lands and also in cases such as Madagascar, the food once prevalent in the waters nearby.

For the local communities and tribes, trees are a necessity for their survival. Throughout the many years of living off these lands, deforestation has been created not through malice or greed but just in the necessities of life and survival.

Here are four reasons why deforestation has occurred over the hundreds of years and more for the people of these lands.

1. The local villages need trees to construct their homes.

2. Wood is their basic fuel use to cook their food.

3. As you can appreciate living in such conditions on the land, families need to keep warm in the cold nights and days, so wood again is required to keep them warm and even safe from outside predators that make be lurking around.

4. To survive off the land, the local villagers grow crops; however, this requires much land clearing. The only way for the villagers to clean the land is by taking down more trees.

So you can see how important the trees are on such lands for the various needs for their survival; however, a lack of understanding over the many years has not provided an answer to replace what was once lost.

The result of deforestation brings other issues that also affect the local villagers and the life around such areas.

Here are some other problems deforestation has created.

• As soil erosion begins, the fertility of the land is reduced in some areas to the point of becoming a barren land

• Tree loss can no longer provide the soil’s nutrients, affecting other plants and other living creatures, both in the air, land, and waters.

• Trees provide shelter for many creatures as well as providing shelter from the Sun and winds.

• Loss of trees greatly increases the chances of flooding, particularly during the wet seasons as the normal protection Trees and their roots are now depleted.

• Increased water pollution due to eroded soil being washed away by extreme flooding and high winds. Any water nearby is a vital necessity used by the local villages to wash, drink for themselves and land animals.

• Crops that once had trees to protect them during times of difficulty face devastation when flooding takes its toll, thus destroying many crops needed for survival.

To help the community of these lands understand a better way, The Eden Reforestation project came to the rescue.

The Eden Project hires and trains local villagers to plant new trees that are local to that particular area.

This not only gives them employment, but they are also receiving an income to provide further for their families.

There are many benefits of having local villages as opposed to hiring staff outside the area.

• Local villages are now receiving employment and income in their area

• Reforestation begins to form, which greatly improves the area they live upon

• Land begins to gain back the fertility

• By having local villagers employed, they are more inclined to protect and maintain the area to a greater degree than before

• Livestock is increased along with improved quality and quantity of food

• As income increases, this now provides the opportunity to buy normal necessities other’s normally take for granted, such as soaps, clothes, etc

Where does the funding come from?

The Eden Reforestation Project is a non-profit organization and has managed to create tree planting most cost-effectively.

The main form of funding comes from businesses that join in partnership with Eden in various ways.

This can come in the form of a point of sale or service provided by their particular product.

Another means of funding is a donation from readers who may visit this site or go directly to The Eden Project.

How much does it cost to plant a tree?

To plant a tree only costs 10 cents. This is from the beginning to the end of the process.

To think just $1 can plant ten trees by the local villages.

If you wish to become a partner with The Eden Reforestation Project or wish to donate to this vital program, you will find further information.

Thank you in advance for your support in helping the many local villagers improve their lives and bringing life back to the forests and surrounding areas in the greatest of need.